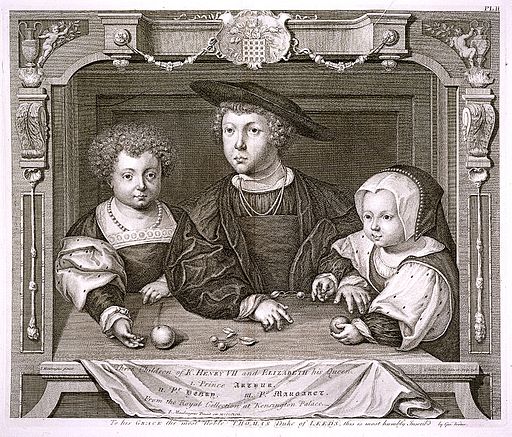 On 28 November 1489, Henry VII and Elizabeth of York welcomed their first daughter, Princess Margaret. Margaret was named after her paternal grandmother Margaret Beaufort and was baptized at St. Margaret’s Church in Westminster.

As a princess, Margaret would play a pivotal role in political alliances. By Margaret’s sixth birthday her father had already considered a marriage to James IV of Scotland as a way of ending his support for Perkin Warbeck.

The marriage of the thistle and the rose was finalized by proxy on 25 January 1503, at Richmond Palace. Patrick, Earl of Bothwell was proxy for the Scottish king, James IV. When the ceremony was concluded Margaret was hence forth called Queen of Scots.

The Thistle and the Rose

It wasn’t until August of that year that their marriage was celebrated in person at Holyrood Abbey in Edinburgh.

The couple was married nearly a decade and even though it was a political match Margaret grew to love her husband, just as her mother did her father.

Margaret gave James IV six children, but only one of the six children would survive — he became James V of Scotland when he was only 17 months old.

James IV was killed during the Battle of Flodden in 1513 when Scotland was fighting against the English. Margaret’s sister-in-law, Katherine of Aragon was ruling as regent in England during the absence of her husband, Henry VIII in France. Katherine celebrated the death of the Scottish King by sending her husband the bloody surcoat of James IV to prove his death. Katherine also suggested that Henry use the coat as a battle banner while at the siege of Thérouanne in France to show his conquest.

Death of the Thistle

At the time of James IV’s death, Queen Margaret was only twenty-three years old. Their son James was crowned King of Scotland  on 21 September 1513, and Margaret was allowed to act as regent, per her late husband’s will – as long as she did not remarry. At the time of the king’s death Margaret was pregnant with his child, Alexander.

When Margaret was appointed regent over her young son it caused a riff among the Scottish people since Margaret was English and a woman. England was the enemy. They had just murdered the King of Scotland.

A faction of pro-French nobles wanted Margaret removed as regent and replaced with John Stewart, 2nd Duke of Albany. John was the closest male relative to the infant prince, and now third in line to the throne.

By June 1514, Margaret had managed to reconcile with the parties, and Scotland and France agreed upon peace that same month. In Margaret’s quest for political alliances she found herself drawn toward the House of Douglas, and in particular Archibald Douglas, Earl of Angus, to whom she was attracted.

Margaret made a fateful decision, on 6 August 1514, she secretly wed the Earl of Angus. By marrying Angus she defied the conditions of her late husband’s will and forfeited her right to be regent over her infant son. The Privy Council declared she could no longer hold the position, and in addition, she lost her rights to supervision of her sons (James & Alexander). Had she obtained permission to remarry things may have turned out differently. In defiance of the Privy Council, Margaret fled with her sons to Stirling Castle.

Eventually, Margaret returned her sons to the new regent. She was now pregnant with the Earl of Angus’ child and they fled to England. The two settled at Harbottle Castle in the north of England in September 1515. It was there on 8 October 1515, that Margaret gave birth to their daughter, Margaret Douglas.

Margaret’s marriage with Archibald Douglas, Earl of Angus had fallen apart – Margaret fought for a divorce, asking her brother Henry VIII for help obtaining one –  the English King would not oblige.

In October 1518, Margaret wrote to her brother (Henry VIII):

“I am sore troubled with my Lord of Angus since my last coming into Scotland, and every day more and more, so that we have not been together this half year… I am so minded that, an I may by law of God and to my honour, to part with him, for I wit well he loves me not, as he shows me daily.”

Margaret was once again in the good graces of her son, and hoped to convince him to improve Scotland’s relationship with England — James had other plans. He wanted an alliance with France, and so he married the daughter of Francis I – Princess Madeleine.

Unfortunately James’ marriage to Madeleine was short-lived and she passed away in July of the same year. After the death of his new bride, James V sought a second french bride.  He married Marie de Guise.  Marie and James would go on to have Mary, Queen of Scots.

Margaret’s third marriage came to the same end as her second. She wished to divorce Lord Methven, but her son would not agree to it.

Death of the Rose

On 18 October 1541, Margaret Tudor died in Methven Castle in Scotland, probably from a stroke. She was buried at the Carthusian Abbey of St. John’s in Perth, Scotland.

You just read Part 3 of the Series:

Read Part 1: The Redemption of Elizabeth of York
Read Part 2: Arthur, The Man Who Would Be King

This was written by Rebecca Larson for Tudors Weekly & Stuarts Weekly

One thought on “The Thistle and the Rose: English Princess, Scottish Queen”