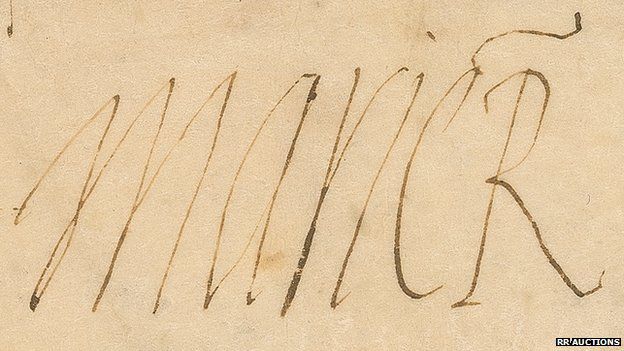 On the evening of 7 February 1587, the imprisoned Queen of Scots was notified of her forthcoming execution the following morning.

For 19 years Mary was held prisoner in her cousin Queen Elizabeth’s country. The very country that Mary’s grandmother, Margaret Tudor was raised.

Mary spent the last few hours of her life in prayer. She distributed her belongings to her household, and wrote her will and a letter to the King of France.[1] This would have been her former brother-in-law who was now King Henry III of France.

8 February 1587
To the most Christian king, my brother and old ally,
Royal brother, having by God’s will, for my sins I think, thrown myself into the power of the Queen my cousin, at whose hands I have suffered much for almost twenty years, I have finally been condemned to death by her and her Estates. I have asked for my papers, which they have taken away, in order that I might make my will, but I have been unable to recover anything of use to me, or even get leave either to make my will freely or to have my body conveyed after my death, as I would wish, to your kingdom where I had the honor to be queen, your sister and old ally.

Tonight, after dinner, I have been advised of my sentence: I am to be executed like a criminal at eight in the morning. I have not had time to give you a full account of everything that has happened, but if you will listen to my doctor and my other unfortunate servants, you will learn the truth, and how, thanks be to God, I scorn death and vow that I meet it innocent of any crime, even if I were their subject. The Catholic faith and the assertion of my God-given right to the English crown are the two issues on which I am condemned, and yet I am not allowed to say that it is for the Catholic religion that I die, but for fear of interference with theirs. The proof of this is that they have taken away my chaplain, and although he is in the building, I have not been able to get permission for him to come and hear my confession and give me the Last Sacrament, while they have been most insistent that I receive the consolation and instruction of their minister, brought here for that purpose. The bearer of this letter and his companions, most of them your subjects, will testify to my conduct at my last hour. It remains for me to beg Your Most Christian Majesty, my brother-in-law and old ally, who have always protested your love for me, to give proof now of your goodness on all these points: firstly by charity, in paying my unfortunate servants the wages due them – this is a burden on my conscience that only you can relieve: further, by having prayers offered to God for a queen who has borne the title Most Christian, and who dies a Catholic, stripped of all her possessions. As for my son, I commend him to you in so far as he deserves, for I cannot answer for him. I have taken the liberty of sending you two precious stones, talismans against illness, trusting that you will enjoy good health and a long and happy life. Accept them from your loving sister-in-law, who, as she dies, bears witness of her warm feeling for you. Again I commend my servants to you. Give instructions, if it please you, that for my soul’s sake part of what you owe me should be paid, and that for the sake of Jesus Christ, to whom I shall pray for you tomorrow as I die, I be left enough to found a memorial mass and give the customary alms.

Wednesday, at two in the morning

Your most loving and most true sister
Mary R

‘If you look at the handwriting it seems very composed, very calm. She goes through reasserting her Catholic faith, reasserting her right to the English crown, but she’s also looking at her servants and making arrangements for them to have their wages paid after her execution, so it’s really extraordinary that she was able to think about that, as well as everything else, in view of her impending execution only a few hours later.’