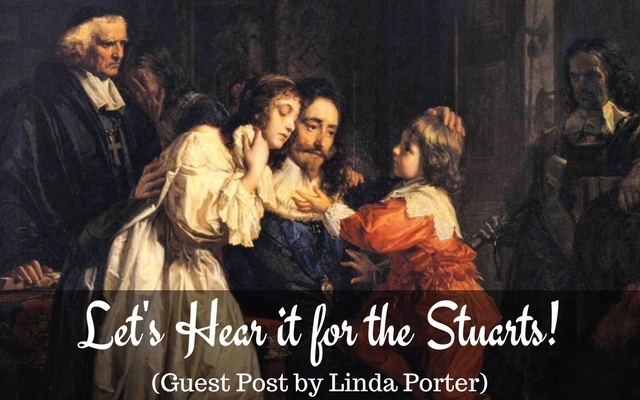 Historian and writer Linda Porter reports on a lively session with Charles Spencer at the Cheltenham Literature Festival.

It was my great pleasure recently to speak at the Cheltenham Literature Festival with Charles Spencer, on the topic of ‘Charles 1: a toxic legacy’.  Charles’s latest book, To Catch a King: Charles II’s Great Escape’ is a thrilling new account of the king’s adventures after his defeat at the battle of Worcester while my own book, Royal Renegades: the children of Charles I and the English Civil Wars looks at the dramatic and little-known stories of the six children of Charles I and Henrietta Maria who were still alive when their father was executed in 1649.

One of the points that was frequently referred to in discussion and in subsequent questions was whether interest in the Stuarts and the Civil War period is on the rise, after years of being submerged by the Tudors.  The general consensus was encouraging.  There is clearly an appetite for more accessible books on the Stuarts and there are definitely signs that more popular historians, including a significant number of women writers, are moving into the period.  Having said that, although the questions were thoughtful and wide-ranging, covering everything from Henrietta Maria’s role in the Civil Wars to the fate of the army Leveller mutineers in Burford Churchyard, none of the questions came from women.  So, come on ladies – there really is more to our past than endless books on Henry VIII’s six wives (and I say that as someone who has written a biography of Katherine Parr) and gushing accounts of how wonderful Elizabeth I was.  The Stuart era, for all that it was a very different time from our own, speaks to us powerfully through the many letters, diaries and personal accounts that survive, in ways that are much more direct than the more distant 16th century.  It is full of romance and suffering, of towering personalities and epic battles, as well as raising fundamental questions about how society should be ordered and function that still exercise us today.

Meanwhile let’s take a look at books that are about to come out, which may interest readers wishing to know more about this vitally important period of our past.  Leanda de Lisle’s new life of Charles I, White King, the first popular biography in fifty years of the king who lost his head, is out in January 2018.  Lucy Moore’s book, Lady Fanshawe’s Receipt Book: the life and times of a Civil War heroine, will be published next month.  And I am now working on a new book at Charles II’s mistresses, who have mostly been written about by middle-aged men, with predictable results.  Hopefully we can really start to redress the balance between the Tudors and their successors, the Stuarts.

One thought on “Let’s Hear it for the Stuarts!”